It's Encodings All the Way Down 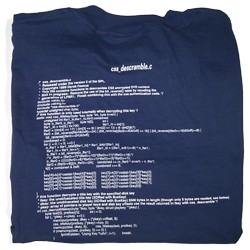 Encoding is one of many simple but magical ideas that makes digital computing possible. Everything that a digital computer does involves an encoding. Plus, a lot of what we do as humans to communicate with each other involves encodings, too. I want to spend some time appreciating just how amazing the idea of an encoding is—even though there's no way I can do it the justice it deserves in one small blog post.

A haiku that decrypts DVDs

In the 1990s, some entertainment companies used an encryption protocol called CSS, or "content scramble system" (no relation to the style sheet language) to prevent users from playing DVDs on unapproved hardware. It was an early and aggressive move toward DRM, and it proved to be a major source of frustration for Linux users who couldn't use approved hardware.

But in 1999 a sixteen-year-old from Norway named Jon Lech Johansen figured out how CSS worked. Johansen released a small C program called DeCSS that unlocked the encryption. One result was that a lot of Linux users could finally watch DVDs on their computers, and they were very grateful for Johansen's clever work.

Another result was that entertainment companies lost control over a critical piece of their copyright infrastructure, and they were very angry about Johansen's clever work. Johansen and his dad (because he was a minor) were arrested. Following pressure from the MPAA, charges were brought against Johansen in Norway, and the hacker magazine 2600, among others, was sued for its involvement in spreading the code.

In response to the aggressive legal action against DeCSS, free software advocates published copies of DeCSS in a variety of outrageous formats in an attempt to make the point that software is an encoded idea, not a product, and therefore should be considered protected speech. David Touretzky collected a few of the cleverest encodings of DeCSS in his Gallery of CSS Descramblers: T-shirts, dramatic readings, mathematical proofs, and even a 456-stanza haiku.

The point was simple and clear: computers run on ideas—ideas that can be encoded in so many different ways that attempting to restrict their spread is both ethically misguided and practically impossible.1

DeCSS, encoded in T-Shirt form by the old CopyLeft shop.

A function that turns words into numbers

Another case that demonstrates the magic of encoding: number bases. I've struggled with number bases for as long as I can remember. Binary and hexadecimal in particular have always vexed me, and I've relied on all sorts of kludges like color wheels to allow myself to work with them without really understanding what they do.

This month, however, I had a breakthrough. I was working on some legacy code that scraped rows from Google Sheets documents using Python and Google's old API client. The sheet schema had changed, and we needed to update the import script to make sure we were pulling attributes from the right cells.

When the Google Sheets API client returns rows from a spreadsheet, it returns them as nested arrays, meaning that columns have to be accessed by numerical index. To give an example, say you have a simple sheet cataloguing people's programming experience, where each row represents a person:

Here's how the data would get returned by the Sheets API:

So if you want to build out the schema, you have to make a map from the attribute to the list index.

The fastest way to make this would be to build the index by iterating the header row.

Unfortunately, we were using different keys on the backend to refer to each attribute. That meant the schema mapping would have to be done by hand.

Recall that in the Google Sheets web app, as in most spreadsheet programs, column indexes are displayed alphabetically. Column 1 is called 'A', column 2 is 'B', column 27 is 'AA', and so on.

For a small sheet, this wouldn't have been a problem: just count the columns to find the corresponding numerical index. Except our sheets were huge! The biggest sheet we import has 113 columns, and there are three sheets total.

Needless to say, adjusting the schema in the importer was going to be a pain. I spent a few frustrated minutes trying to translate the alphabetic columns to numerical indices, making sure the whole time to validate that I was assigning the correct data type to each field. It was slow going, and it was easy to mess up.

In the heat of this frustration, the dormant part of my brain that had tried and failed to understand number bases lit up: alphabetic columns are just base-26 integers! My problem wasn't that the columns were the wrong data type, it was that they were the wrong radix!

From this perspective, the task had an easy solution: a quick method to convert from base-26 to base-10, so that I could eyeball the column that corresponded to each attribute.

(In the production code, we initialize total = -1 to make sure that the conversion is 0-indexed.)

The implications of this method amazed me. Not only are spreadsheet columns base-26 integers; in fact, every English word is a base-26 integer. If you stripped out the numerals and the punctuation, this post could be read as a base-26 integer! Here's a base-10 representation, for fun:

Both the alphabet and the numerals are implicated in the definition of the hexadecimals, for example, but in hexadecimal the two sets of symbols "mean" different things, so the translation to and from alphabetic columns is different:

One key piece for me to understand was that there is no essential representation of the set of all integers: base-10, binary, hexadecimal, and the alphabet are all valid ways of communicating the abstraction that is "the integers." The same can be said for the alphabet itself. Transliteration systems like Pinyin, for instance, help capture the meaning of a text when moving from one encoding (hànzì, a set of Chinese characters) to another (the Roman alphabet).

So much of computing relies on this fundamental insight. Relatively simple ideas like file types, converters, and compression obviously implicate encodings, since the programs that implement them often ask us to declare our encodings explicitly. But more basic utilities like processors, compilers, and programming languages all also rely on the fact that the "ideas" (in this case, the procedures) that they describe can be translated and encoded in a symbolic system that machines understand: binary strings.

To me, this is a foundational magic of computing. It's the insight that allows you to accomplish strange feats like storing any file as an album on Bandcamp, as well as simple tasks like saving a word processing document that feel mundane but are actually full of wonder.

Or, if you'd like, printing a T-Shirt that can rip DVDs.