How To Throw a DIY Show in a Chicago Park 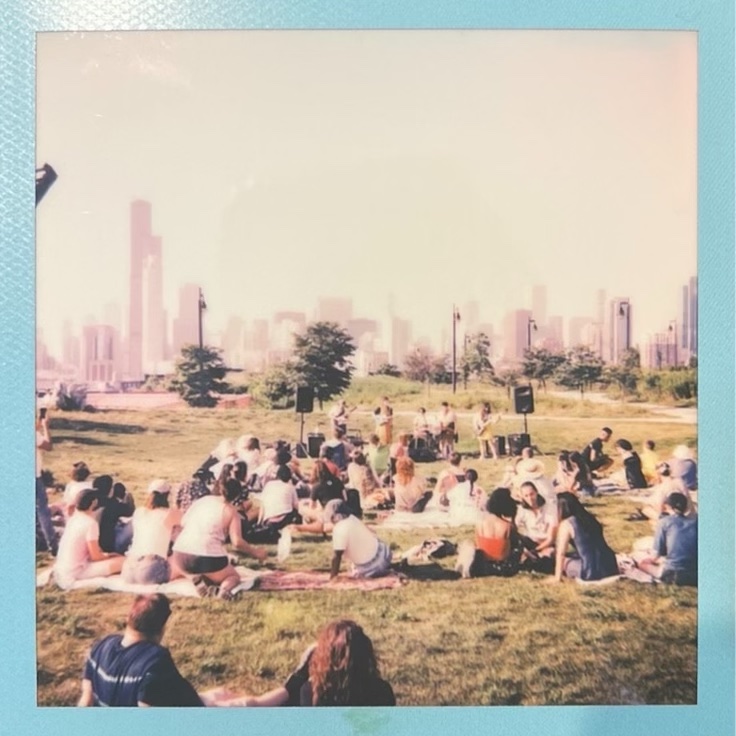 This past weekend my band Hard Femme threw an album release show in Ping Tom Memorial Park, one of our favorite parks in Chicago. The easy way to throw a show like this is to show up unannounced, plug in, and hope the cops don't shut you down, but since we were booking two bands I admired (Ester and ire ola) I wanted to plan the show legally so there was no chance we would get shut down before they were able to play.

Planning the show was a lot of work, but it was also really rewarding, so I want to document what we learned in case anyone else wants to try making a lot of noise in a city park.

Before reading this guide, you should probably check out the Park District website to see how they describe the permitting process. It's surprisingly clear and it will give you a sense of the basic tasks you need to complete in order to secure a permit. Consider the following guide to be an addendum to the city's FAQ, providing some extra flavor based on my own personal experience.

The park you choose will have a major impact on the vibe of your show. Technically the permit can cost more or less depending on the park you choose, with small parks priced at $120 and large parks priced at $200, but I found that in practice all of the parks I was interested in were in the $200 cluster. The most important thing is that parks differ on how well maintained they are, how busy they are, and how easy they are to access via transit.

We chose Ping Tom because it's close to two train lines, easily accessible from all parts of the city, and has unparalleled views of the skyline. All of these factors worked out in our favor, but we underestimated how many of our friends would want to drive and end up frantically searching for parking right in the middle of the Chinatown summer festival.

I don't feel too bad about this since I think discouraging your audience from driving is a good thing, but it's something to keep in mind. 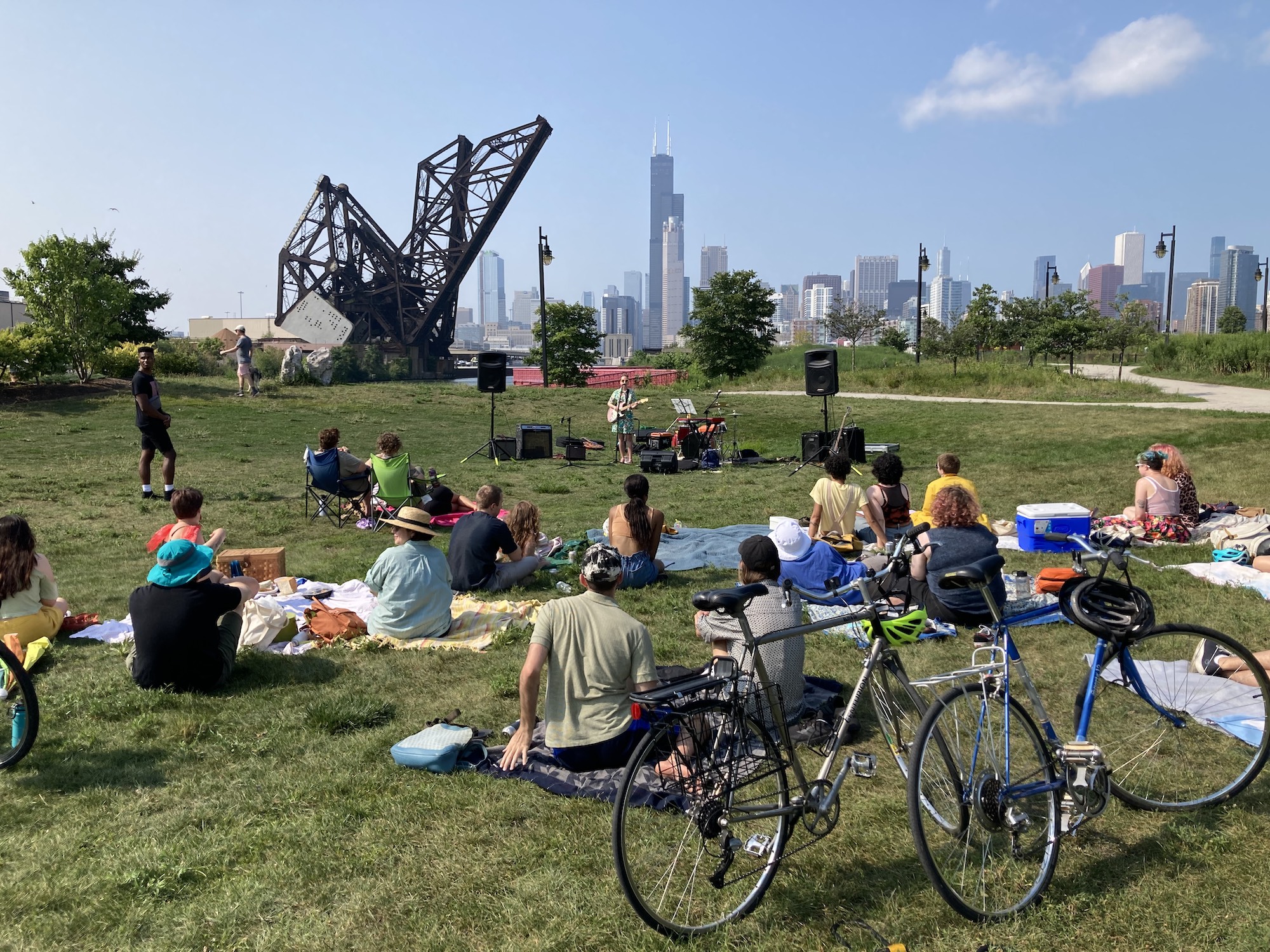 There were a lot of hidden fees involved in our show that we didn't plan up front. Here's a detailed breakdown of everything we had to pay for:

We also considered renting a portable toilet, which would have cost us around $200 for the day. We knew there wouldn't be bathrooms on site because the City has decided to keep the bathrooms in the REI boathouse closed for the forseeable future (thanks guys!) but luckily the Chinatown library had a public bathroom and was open on a Sunday.

You may face even more fees depending on whether you want to do things like serve alcohol or... bring animals, which is apparently a thing you can do. Check the Park District's pricing page for details.

We had about 75 people show up, which means we might have broken even if we had asked for a $10 donation. We decided not to ask for money since we were just happy to see our friends again after a long pandemic winter.

Submit your application a couple months in advance

The permit application is not terribly complicated but it can take a really long time to process. The minimum application review period is 14 days, and for us it actually wound up taking about a month.

I suspect that the Park District didn't actually get my first application email since I never got a confirmation email in response. I finally got one when I followed up two weeks later, and then ultimately we got our conditional approval two weeks after that, which makes me think they started the process two weeks late.

Pay the fees and buy insurance

After we got our permit approval we were able to pay the permit fee through the Park District website. We were required to get insurance for up to $1 million in damages, which sounded ridiculous and terrifying, but we ended up paying into the Park District's policy via Rolei Financial Services and it only cost us $100. There may be better deals to be had, but I appreciated that it was fast and they knew exactly what we needed.

Hard Femme setting up the gear. Remember that half of playing music is carrying heavy stuff.

This was the first show I'd thrown in years and I was a little bit overwhelmed at how much equipment we needed. When you throw a show in a park, you're starting from a completely blank slate, and you don't have anyone to fall back on if you forget an extension cord and need to borrow one. The following is as exhaustive of a list of our gear as I can remember.

Amps might seem obvious for a guitar band, but none of us had performance amps so we had to borrow from friends. The three 100 watt tube amps that we borrowed from the Chicago Electric Piano Company each packed enough punch to reach across the field at Ping Tom. The one 60 watt solid state bass amp that we brought ourselves was not quite loud enough to project our keys at the same degree of loudness, however, and I wish we'd had time to get a bigger one.

In hindsight, this was not enough speaker power to give us the kind of vocal volume we needed to be heard over four amps and a drum kit. We pushed the vocals as high as they would go and it wound up sounding distorted. Next time we'll bring at least three 500 watt speakers.

Most parks do not have free electricity you can use, doubly so during the pandemic. To supply our power, we rented a 3500 watt generator from our neighborhood hardware store, Clark Devon Hardware.

3500 watts turned out to be more than enough to power two PA speakers, one monitor, and four amps. We ran the generator on the low-power "eco-mode" and ran it continuously from 3pm to 7pm, which used up half of the gas in the tank.

We drastically underestimated the sheer length of power cables that we would need to reach all of our equipment. After a last minute trip to Mariano's we ended up using four 15' extension cords and three grounded power strips. Lesson learned: always bring more extension cords than you need.

Similar to extension cords, we should have brought more XLR and guitar cables than we thought we needed. We were lucky enough to be able to borrow from Wendy and Shelby, but we wound up needing to chain more than a few 15' XLRs together to reach the speakers, and we needed an XLR to DI converter to have enough mic inputs on our mixer.

Also, make sure to bring a headphone to RCA cable, since you'll want to play music off of your phone between sets.

We made the mistake of thinking we could fit everything in my 1999 Volvo V70 station wagon. When less than half the equipment fit, we realized we would need a real-deal cargo van.

Luckily we were able to get a cargo van on Getaround at the last minute on one of the biggest moving days of the year. I'm still not sure how we managed to pull this off and I consider it an act of providence.

We went back and forth on whether we should provide food and drinks. It wound up being pretty hot in the sun so I'm glad we didn't have to tend to melting food, but bringing a cooler full of ice and drinks turned out to be a good move. A more entrepreneurial spirit could have sold these drinks for a profit but it felt good to be able to offer them to our thirsty friends at no charge. 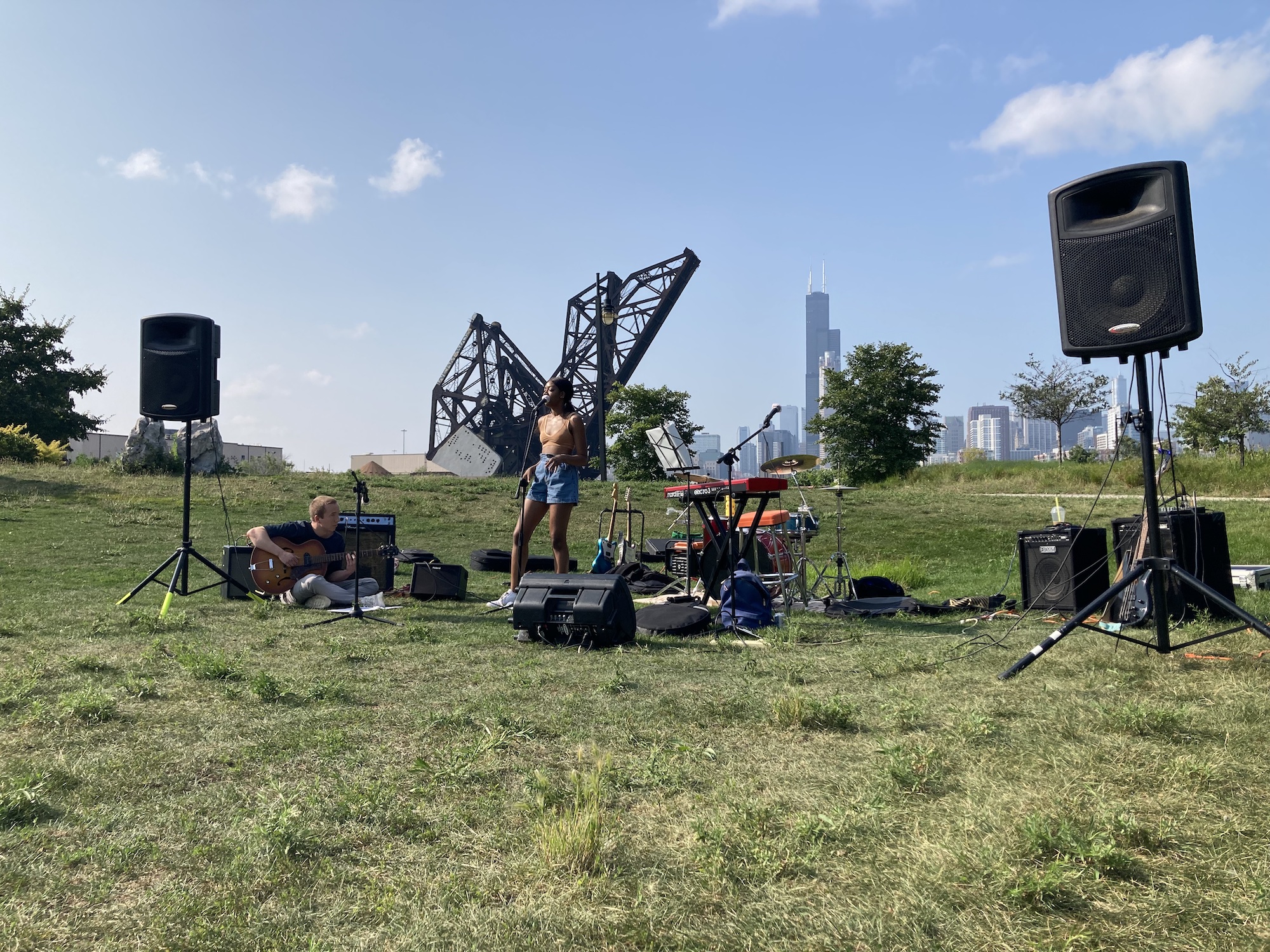 Get to the park early

We planned to pick up our van at 11am, load up equipment by noon, and get to the park by 12:30pm to sound check. Naturally lots of things went wrong and we wound up running late. By 3pm we were fully set up and ready to sound check, but guests had already started to trickle in for the first set at 3:30pm. I think we probably could have improved the sound if we had finished setting up even just half an hour earlier and taken more time to sound check.

The lesson here is to plan for your itinerary to get delayed by unexpected obstacles, and leave way more time than you think you need. In hindsight, we should have aimed to be at the park at 11:30am for a 3:30pm show. Better to hang out in the park and listen to music on your big PA system than be left running around buying extension cords at the last minute.

Have a good time

The whole point of this exercise is to have fun, so make sure you actually do that. People will love the show and you will feel very accomplished for pulling the whole thing off. Turn the music up as loud as you want. If anyone complains, they can take it up with your permit.

The good news is that probably no one will complain at all. In fact, multiple people approached members of our audience to say they were enjoying the show and ask for the names of the bands who were playing, which makes me think that park shows are an underrated way of promoting your music. People like the park and they go there even when they don't know there are cool shows happening. Make some new friends and enjoy one of the best amenities the city has to offer.